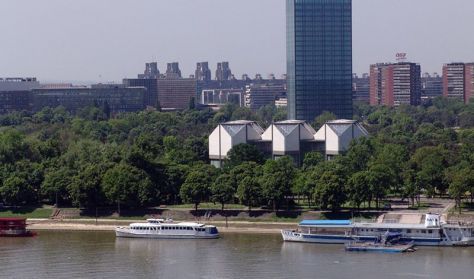 The Belgrade Museum of Contemporary Art was opened on October 20th 1965. However, Museum activities began as early as 1958, when an act brought by the Cultural Council of the Peoples’ Committee of Belgrade established the Modern Gallery, an institution the purpose of which was to supervise the development of contemporary art in Yugoslavia. The Executive Council of the Socialist Republic of Serbia decided to construct a building which would live up to the standards of modern museological principles, and allots a location for it in New Belgrade, at the Sava-Danube junction, across the Belgrade Fortress. An open competition for the project of new building was announced in 1960. Architects Ivan Antić and Ivanka Raspopović won the competition with a project for which they would later, namely at the opening ceremony of the Museum, be awarded the October Prize of the City of Belgrade for Architecture. After the construction of the new building was completed, the Council of the Modern Gallery passes a new name for the institution – the Museum of Contemporary Art. The first director of the Museum was Miodrag B. Protić. The theoretical and practical experiences of the most distinguished international museums of modern and contemporary art were taken into consideration in the process of the creation of Museum’s guiding work principles. Museum’s founder and its first director was Miodrag B. Protić, a painter and the author of many significant exhibitions, books and texts concerning the history of modern Yugoslav and Serbian art. The other directors of the Museum were: Marija Pušić (1980-1984), Kosta Bogdanović (acting director, 1984-1986), Zoran Gavrić (1986-1993), Radisav Trkulja (1993-2001), Branislava Andjelković Dimitrijević (2001–2013),Vladislav Šćepanović (acting director, 2013-2014), Jovan Despotović (acting director, 2014-2015) and Slobodan nakarada (acting director, 2015-).

Authors: architects Ivan Antić and Ivanka Raspopović
The Building of the Museum of Contemporary Art is situated in New Belgrade, on the left bank of the Sava River, across the Belgrade Fortress. Its unique concept of the interior design and, on the other hand, its link to the surroundings represent an original solution which meets basic museological requirements. The building is an interesting example of museum architecture worldwide. It is surrounded by a sculpture park with works by the most significant Yugoslav sculptors of the 20th century.
The main volume of the building is a polymorphous crystal comprised of six cubes with cut angles. The facade are mainly covered with white marble panels and partly with glass, and the sloping roof surface is covered with glass. The interior is characterized by its functionality and spaciousness. A unique and specifically arranged interior space, without vertical partitions and corridors, is divided into five exhibition levels interconnected by stairs. These levels, which almost merge into one another, served as a means to connect a number of spaces of different heights into a whole. This solution made it possible for visitors to view the exhibits on the lower levels from multiple angles from upper levels, as well as to reach the upmost levels with minimum effort. The total area of the interior space is 5.055 square meters. The ground floor is standing 1.80 meters above the ground, and the first level is 3.90 meters above the ground. The difference in height between second and third level spans from 2.34 m to 1.56 m. The highest level is 10.14 m above the ground.
The Museum’s Building has been declared a cultural property of national interest in 1987. and is under the protection of Republic Institute for Protection of Cultural Monuments.Web: www.msub.org.rs
Continue Ušće 10, Blok 15, 11070 Novi Beograd